The economic opportunities of the Post-Classical period were in both manufacturing and agriculture. Population growth led to urbanization and overuse of resources. Environmental issues and disease led to population shifts, as well. Existing forms of labor were adapted and new forms, such as serfdom and mit'a, were introduced. Cities rose and fell for many of the same reasons as they always have, and peasant rebellions were staged over taxes (not surprising). The Red Turban Rebellion was successful after 30 years of fighting. The victory led to the beginning of the Ming Dynasty at the end of the Post-Classical.

Innovations in Agriculture
Chinese, Persian, and Indian artisans and merchants expanded their production of textiles and porcelains for export; industrial production of iron and steel expanded in China


Why did the Chinese peasants overthrow the Yuan Dynasty (Mongols)?

Posted by Anonymous at 8:27 PM No comments:

Since this lesson bridges the unfavorable conditions of the Gilded Age with the Progressive Era, a closer look at the evidence of law and safety procedures we have in our school was a good place to start.

Find artifacts in the school that relate to exiting safely in the event that a fire broke out in one of the second-floor hallways.

When you get back to the classroom, meet in groups based on your artifact and make sure you have one device for every three group members.

Our goal is to add historical context to the legal reasons why we have particular procedures for emergency exiting. This information will be used as a component to evacuation training.

Use your device or one of the classroom devices to look up a connection between the artifact you found and an event that impacted the law(s) that stipulate use of the artifact. Write the artifact and the event/legal connection on a piece of paper and tack (or tape it to the wall. 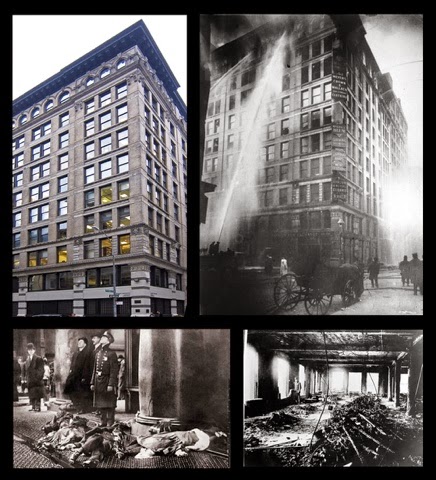 Write questions that would need to guide your research if you needed to find out what happened.

Read the the Department of Labor's explanation of the Triangle Shirtwaiste Fire. Make notes about the safety issues and what the government has done to ensure that disasters like it don't happen again.

Make a placard that explains what the safety artifact is and how it came to be required by law. We will print, laminate, and post them on the History Hallway.

A Remind message will help students connect disasters like this one with other labor-related issues that were alleviated through legal codes. They can stamp check if they get it or ? if they don't. If three or more students stamp ?, they can receive a message for support without messaging everyone, again.

Mongols and the Barbarian Empires

The Mongols changed the world. This group of pastoralists showed the world that you didn't have to agriculturalists to be advanced and powerful. The Mongols created modern Russia through interaction with the princes at Moscow. At the decline of the Yuan Dynasty (the Mongol Empire in China), they were the receiving end of the first use of firearms that had any impact on world history.

Goal: Explain the impact of the Mongols on economic and political systems in the late Post-Classical.

The discussion piece introduces the Mongols and how they interact with others. This resource has images, secondary source excerpts, and questions for reflection. I project it on the screen and zoom in on the parts as we discuss, which is led through cues and questions.

Students watch this Crash Course video and make notes about the Mongol government structure. Consider what makes the empire success with trade and how jobs are assigned.

End of the Yuan, Rise of the Ming

The Red Turban was a peasant group that revolted against the Mongols in Nanjing, beginning the decline of the Yuan and ushering in the Ming Dynasty. The plague was hard on the population, which made the peasants seek to overthrow the Mongol rule in China.

This slide presentation is only for review. It contains no new critical content.

The previous lesson comparing the knights and samurais was practice for this assessment. Students were given the DBQ without the background essay to complete the DBQ quiz worksheet.

Posted by Kevin Zahner at 6:23 PM No comments:

Instead of teaching feudalism in Europe and saying, "Oh, yeah. It happened in Japan, too." I decided to teach both at the same time through a DBQ that asks if the similarities between the samurai and the knight are greater than the differences. This prompt requires students to choose a side and sift through the evidence many times to prove it.

Goal: Explain the similarities and differences between the warrior classes of Post-Classical Japan and Europe.

In an effort to show students how the big picture can be revealed by looking closely, I chose a video that compares the katana and the longsword.

The DBQ (from the DBQ Project 2013) includes a background essay and six sets of documents.

Students can choose to write it on their blogs, make a video, write a fairy tale, or any other way. The most important requirement was that the final product had to include facts about the economy, society, and government in terms of similarities and differences from the point of view of the chosen warrior.

Posted by Kevin Zahner at 4:29 PM No comments: